"This is how the story begins...

You may remember that back in April we held a benefit for Lucky Pup Rescueat the studio. I was very impressed with this organization. In the three short years they have been in existence, they have helped find forever homes for over 900 dogs!!"

Lucky Pups in the News

"It's been just over a year since Janet Wendle rescued her first dog, and in that time her Lucky Pup Rescue organization has just passed the 200th dog mark.

A lifelong animal lover, Wendle said she started toying with the idea of forming her own rescue group in the fall of 2007."

Mutts on a Mission

"The partnership of two local organizations is giving rescue and shelter dogs all they need: a forever home and a mission.

In 2004, Brooke Corson was serving in Fort Benning, Ga. as a supply sergeant for the U.S. Air Force when she got Angus, a Cairn Terrior puppy who travelled everywhere with her. Angus won the hearts of soldiers serving with Corson, sitting in their laps when they had a bad day or simply needed a symbol of affection."

"Elyssa Cooper said dog owners and lovers of Maine have plenty of reasons to enjoy Junebug's Beach House, the new business she has opened with her partner, Tricia Zerhusen.

Junebug's opened at Caswell Farm on Route 1 in June, featuring coastal-inspired gifts for people, pets and the home." 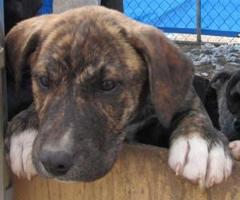 The event will include a silent auction, a dog-themed art show, dog adoptions and a book-signing with Stuart Wisong, author of "Angel, Come Home," the popular story of a dog's adventures in Paris."

"Meeting Meena, you are greeted by an exuberant, affectionate 9-month-old puppy. It's hard to imagine her struggle with abuse and her long journey from India to Eliot.

Meena's temporary guardian, Lindsey Reider, is hoping to find a permanent home for this courageous pup."

"There are dog lovers, and then there are people like Janet Wendle. In 2007 the Kennebunkport, Maine, resident–a teacher and the owner of three dogs at that time–launched Lucky Pup, a rescue service that places shelter canines with new owners. “I had no idea what I was getting into,” Wendle quips.After connecting with a large animal shelter in Arkansas, Wendle soon found herself shuttling back and forth between the South and home and meeting with prospective dog owners in New England. Much of her work stems from her mission to be as thorough as possible."

"Denise Hamilton of Arundel wasn’t sure she’d ever see her 7-month-old rescue mix, Lexi, again when the pup ran away from her husband at Parsons Beach in Kennebunk nine days before Christmas. However, with the help of strangers, Lucky Pup Rescue in Kennebunkportand Granite State Dog Recovery in New Hampshire, the family was able to get Lexi back on Dec. 26."

Rescue Runs on Your Support

"Lucky Pup Rescue, a statewide organization with no staff or office, had its six-year anniversary in January. Since its inception, the group has found homes for more than 1,200 dogs, and amassed an army of nearly 100 volunteers.Volunteer Kirstin Mininni of Biddeford has both fostered and adopted dogs.

“Our biggest need is for people to open up their hearts and lives to dogs,” Mininni said."

"On an afternoon stroll through Fort Williams Park in Cape Elizabeth, you're bound to meet one of its many four legged celebrities. It's one three legged dog named Gracie that seems to really capture hearts."

"Phineas favors digging. Ryder rolls. Sammi and Shyla are all about the running. And romping. And running. With more than 75 inches of snow so far, a lot of humans are ready for this winter to end. But not dogs."